Still in his housecoat and slippers, Andy Brasky sauntered through his modern kitchen with a fresh cup of piping hot americano in hand. It was 5:30 am, his usual wake up time. Quietly,  so as not to wake his family, Andy slid the patio doors open and stepped onto the second story balcony that overlooked the beautiful Bras D’or Lakes.

The water shimmered softly as the sun was also just beginning its day. Andy’s white, 30-foot sailboat bobbed slowly at the end of the private dock. A panoramic collection of trees that protect the lakes year round stood tall and silent. Calm waves whooshed and chipper birds sang. A million dollar view that was worth every penny, thought Andy. He parked himself in his favourite lounger. On a normal day, Andy would usually dive into a book until his kids awoke, but today was different.

Today was his birthday. 38 years old, and Andy was feeling both thankful and nostalgic. For a kid who was supposed to amount to nothing, Andy had health, happiness, love, and wealth in his life. He had found purpose and balance.

His life wasn’t always good, but it sure felt pretty darn good today.

Reclined in his chair, Andy took a sip of coffee then closed his eyes. He couldn’t believe that 20 years had passed since the summer that changed his life forever. He remembered that summer, and his dear friend Eugenio, like it was yesterday.

The packed gymnasium at my high school is standing room only and sweltering hot. It seems as though our whole town is in attendance, dressed in their Sunday best and using the program of events to fan themselves. I sit uncomfortably with my 115 classmates, dawning my royal blue gown and cap, internally critiquing the array of speeches that come with every graduation ceremony.

“Today marks the culmination of years of hard work.” Well, I put in as little effort as I possibly could. My report card certainly reflected it. I “earned” a pass out of high school but an entry into nowhere.

“The friendships you’ve made along the way will last a lifetime.” Well, I didn’t make any friends. My family moved here just when I was entering high school. This town is like most small towns – filled with friendly people who don’t actually want to be your friend. Everyone here already has an inner circle that has existed since kindergarten. If you are new or different, which I was both, you are often left on the outside.

My name is announced: “Andrew Anthony Brasky”. I almost trip up the metal stairs leading to the stage. It would have been more fitting had I indeed fallen flat on my face in front of everybody. The real funny part about that scenario is that I bet no one would have even gasped or laughed. It was like I didn’t exist in this school or town.

I kept my head down when I received my diploma, and it remained down for the walk back to my chair. No pause for a picture. No big smile. I said it seemed as though the entire town was there, but I knew two people who weren’t in attendance. Pete and Anne Brasky. My mom was at sea with the Coastguard, and my dad “doesn’t do big crowds.” I entered the school completely alone and was leaving feeling the exact same way.

The valedictorian ended her speech with the inspirational advice that, “The future is ours to seize.” Well, my grades weren’t good enough for any college or university. I had no job prospects and no money. And, to top it off, I had no clue what I wanted to do with my life. What exactly was I about to seize?

Choosing to run my first marathon was challenging, fun, and rewarding. It was also something I never thought I’d ever do. For anyone interested in tackling a marathon, or any other goal, here are my top 5 takeaways:

1. Set out a plan and stick with it

2. Adopt the Qualities of Those You Admire

Here’s a quick breakdown of how it works:

Outcome-based goal: I am going to run a marathon.

Identity-based goal:  I am a marathon runner.

In Atomic Habits, Clear explains how shifting to identity-based goal setting can change your approach to achieving your goals, and I agree.  When I started running, I identified as a basketball player who wanted to run a marathon (outcome based). I’d go for runs and hope for the best, knowing that if I ran enough I’d probably be able to run a marathon.

Once I made the identity shift to view myself as a marathon runner instead of a basketball player trying to run a marathon, I began doing more things that “marathon runners” would do, like sticking to a training plan, morning runs, proper stretching, focused strength training, reading about running, and adapting my diet (I lost 16 pounds during the process).  As a result, I felt like a marathon runner on race day and felt confident competing against other people who identified as marathon runners.

Achieving any goal is easier when you have people supporting you, inspiring you, and holding you accountable.

5. Begin with the End in Mind

The end game was always top of mind. My training plan was for a 3:15:00 time, and I would have been happy to finish the race in that time.  My ultimate goal, however, was to qualify for the Boston Marathon, which I knew would be nearly impossible if I didn’t put in the daily/weekly work.  Having that lofty goal on my mind made it easier to do the work and make smarter decisions along the way. 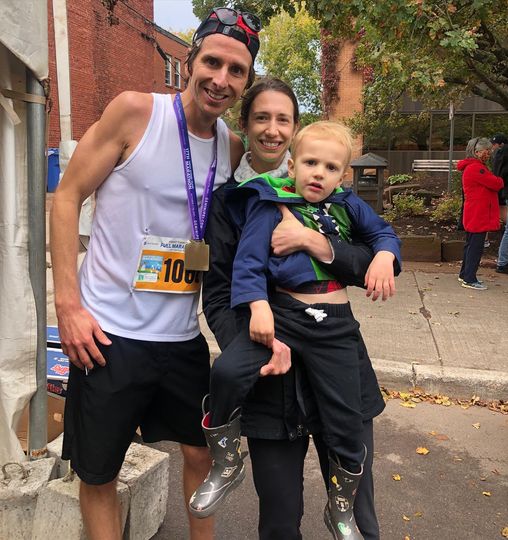 The Magic of the Self

It’s always incredible watching a magician turn the ordinary into the extraordinary. After an act of magic, we are often left in awe, unable to comprehend how the magician pulled off what we just saw.

Once you become internally motivated in your daily pursuits, your potential becomes magical. Much like a magician who leaves an audience wide-eyed and filled with wonder, self-motivation enables you to produce awe-inspiring results that others find amazing to witness and difficult to replicate.

When you deconstruct an act of magic, the (sad) reality is that there is no magic involved, yet there is no denying that the final results are often still magical. Highly motivated people achieve results using very much the same methods a magician learns to leave an audience in awe:

At the end of the day, we all possess the ingredients required to create prestigious results.

There’s no magic to the above quote from Muhammad Ali, but it’s easy to see how his self-motivation was paramount to producing magical results.

You might not be a magician, but you can make your life a little more magical with self-motivation.

I had a cool experience on The High Performing Educator podcast with host, Sam Demma. It was my first podcast, so I was quite nervous, but Sam made it easy – he’s a pro! Check out the episode here as we discuss teaching and leadership philosophies:

The way in which teachers choose to deal with late assignment submissions is an often-debated topic with a multitude of approaches. I shared my strategy via Twitter, and it seemed to be well received, so I decided to elaborate on it in case you’d like to try it this school year.

For assignments, I use a floating deadline.

For example, if I assigned a small project today (Wednesday), I might say that it is due any day next week. This approach allows students to build the assignment into their own unique (and busy) schedules. If students come to see me before the deadline ends and request an extension, I ask them to set the new deadline, which then becomes firm.

That’s my floating deadline strategy (and rationale) in a nutshell. Should you choose to give it a try and have any questions or feedback, I’d love to hear from you. Happy teaching!